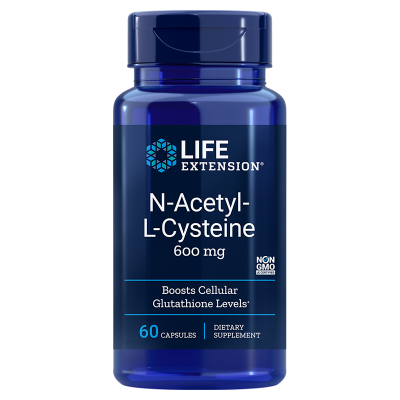 Health Benefits at a Glance:

N-acetyl-L-cysteine is a powerful nutrient which can support such vital functions such as your respiration (breathing function), liver, and immune function. It also provides antioxidant support and helps scavenge the body for free radicals and other compounds which are not native to the human body.

Normal liver, immune and breathing function are all essential to your well-being. Without a good breathing function, your body will not get the oxygen it requires to function normally. N-acetyl-L-cysteine is a highly bioavailable nutrient that supports respiratory health, as well as the liver and immune function.

N-acetyl-L-cysteine is an easily-absorbed nutrient with has potent benefits for whole body health [1]. This compound is also the chemical precursor to glutathione [2-4]. Glutathione is a powerful antioxidant which helps protects cells from damage from free radicals. Furthermore, research has also revealed that besides playing a role against toxins, N-acetylcysteine promotes immune system health [5].

It also defends against insults from foreign compounds at the cellular level and helps protects vulnerable neurons from oxidative stress. Because of its quick absorption rate, N-acetyl-L-cysteine is a potent nutrient in its own right.